Maroni receives the first unanimity in favour of cross-border workers.

It was an intense debate, but in the end the motion that the Governor had wished for no more than twenty days ago, has been approved as “pioneer” document for a bipartisan action. 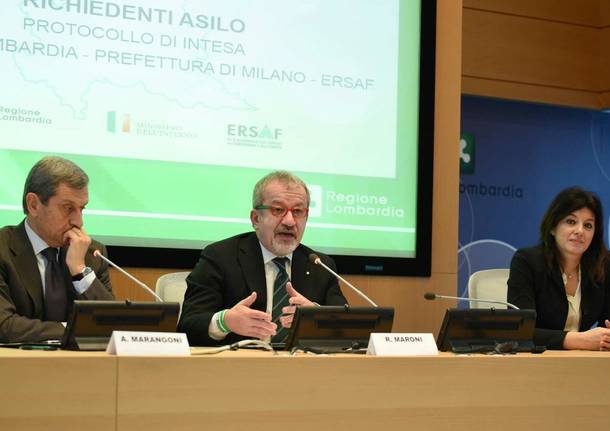 The cross-border workers council had to approve a document to support the regional pressing on the Government, in order to improve the conditions of Italian cross-border workers of the Italian-Swiss agreements in the moment of the ratification. The goal was reached, even though, since the beginning the city assembly became a cahier de doléance because of the problems related to the recent snowfall, which blocked the city, and due to the arrest of Fabio Rizzi, the “guarantor” of the functionality of the services for the city hospital.

The city council will talk again about the snowfall at least for what the request for the technical details on contracts and the offices in charge that was presented by the opposition (Agostinelli for MIN and Nogara for L’Altra Luino). The Mayor already talked about this issue the day after the snowfall, admitting lacks and adding on the 7 March that the means in function were strengthened by one unity during Saturday.

“Our vote was 4 during the emergency, and raised up to 6 in the following days, due to the commitment we gave to solve the problems of the citizens”, said Pellicini entertaining the journalists with the microphones off.

Hospital: there are 6,000 signatures in favour of the structure, but the arrest of Fabio Rizzi, the right-hand man of Governor Maroni and one of the minds of the new regional healthcare reform, worried the councillors of the minority: “The Mayor has to be the guarantor of the functionality of the hospital”, requested again some members of Compagnoni’s group, who was not there, like Taldone, another spokesperson of the opposition.

After other proposals related to the funds for the sport club “Aurora Voldomino” and the entitlement of the lakefront of Colmegna, they passed to motion in favour of cross-border workers.

In the end, they reached the unanimity about the motion of cross-border workers, despite the doubts of the group “L’Altra Luino”.

The motion, that will be sent to the President of the Regione, Roberto Maroni, aims to round up all the members of the Regional Parliament, in order to make pressures to maintain the levels of taxation preceding the agreement (which was signed in February 2015 between Italy and Switzerland) and the revenue that the towns collect every year depending on the residents who work beyond the border.

Pellicini explained to the council groups, “the motion was at the heart of a mediation”.

Besides the relevance for the issue, and for the city, which boasts approximately 2,000 cross-border workers over almost 15,000 inhabitants, the motion that was approved on 7 March is a kind of “pioneer document”, which Roberto Maroni hoped for during a public conference about the reform of cross-border workers.

Now the task passes to the top brass of the Region, who were committed in politics by involving not only the parliamentarians of right centre, but also the parliamentarians who depend on the majority of Renzi, in order to obtain, in the moment of the ratification, better conditions for the about 60 thousands workers who every day make a living in Switzerland.

Here is the full version of the document which was approved on 7 March by the city council of Luino.

Considering that the citizens who work across the border represent a big number of the inhabitants of the border towns and are an essential and important resource of the territory peculiarities; and according to the recent information of the Federal Statistical Office (FSO),which say that in 2014 the number of cross-border workers in Switzerland increased, with a number of workers who live in Italy that is over 60.000 unities, we believe:

Considering that, in February 2015, the Italian Government and the Swiss Federal Council signed the protocol that changes the Convention between the two countries to establish the double imposition; this protocol, which provides for the exchange of information on request with fiscal purposes according to the OCSE standard and ends the bank secret, Washington signed by the Italian Pier Carlo Padoan, the Minister of Economy and Finance, and by Eveline Widmer-Schlumpf, the chief of the federal department of Finance; moreover, together with the Protocol, was signed also a road map, a political document that establishes the way for the progression of the negotiation about other issues, among which the revision of the agreement of 1974 about the taxation of cross-border workers that is still effective today and that consider the exclusive taxation in Switzerland with the refund of 38.8 per cent of the revenue to the Italian towns in the area of The border. So, the new current status of the agreement between Rome and Bern, perfected on 22 December 2015, represents a radical revolution for the equilibrium strengthened in the cross-border Economy, in particular for the workers who Live in the area within 20 km from the border, because it abolishes two mechanisms that were immovable until now: the revenues to the municipalities of the border, an amount  of about 60 millions of euros per year and the total taxation at the source.

Considering that the new agreement to end the mechanism of the refund, envisaging that the Italian Government pays the border towns, this gives a worrying unknown on the warranty of the current revenue to the same towns, and that in a wider context of Italian uncertainty of their fiscal position the Italian cross-border workers in Switzerland will be subjected to a tax, both in the foreign Country where they work and in the Country where they live. Starting from the entrance into force of the agreement, provided for in 2019, the so-called fiscal split, which will bring the full taxation after ten years with a progressive increase of the 10 per cent per year;

STARTING BY SAYING THIS,

THE MAYOR AND THE ADMINISTRATION COMMIT TO

Submit this document to the President of Regione Lombardia so that he calls all the parliamentarians elected in the Regione, together with the subjects of territory representation ( Mayors, Comunità Montane, Province, Forze Sociali and Associazioni frontalieri), in order to share the concerns of the territory and commit to guarantee: