The University needs the “Spring”

"Knowledge frees the future of the country" was the slogan chosen by CRUI Confer-ence of Rectors of Italian Universities that today, Monday, March 21, organized a series of initiatives and meetings to solicit public attention on the long winter in which academ-ic education have been living for years. 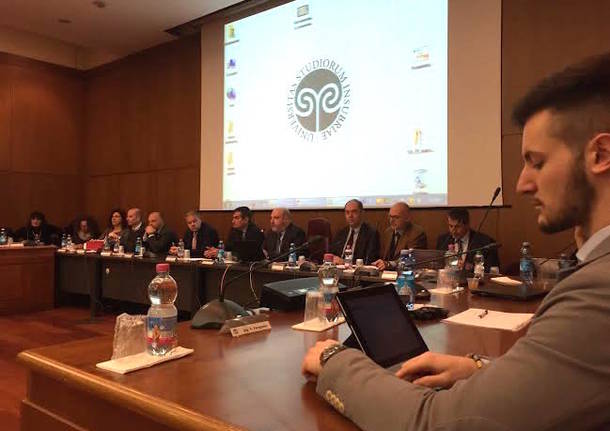 The Insubria University decided to open to the the citizens  today’s meeting of its Senato Academic the collegial body that debates numbers, programmes and funding.

After observing a minute of silence in memory of the young victims in Catalonia all Erasmus participants, Rector Alberto Coen Porisini presented a video produced by the CRUI as a photograph of the decline of this system of further education.

A bleak analysis that speaks only of cuts and sacrifices, that levels everything to the “standard costs” and imposes a cap on salaries to new employees, in fact profoundly debasing the role of university professor: “You enter the system at 35 years old,” said the rector, “with that salary and with that progression career there is certainly no incentive to our bright young minds to be spent in training. ”

And yet education improves the welfare of people, as was pointed out by Istat ” Every euro invested in universities returns two euros to the territory” recalled Coen.

Instead, gradually, thanks to the economic crisis, investments for the universities have grown thinner, so much so that today Insubria receives from the state € 40 million compared with an expense of 80 million for providing training for its 10,000 students. Each student costs about 8,000 Euros while in Germany they spend 13,000.

The comparison with the German world emerges often in the Chancellor’s speech because the university of Varese is affiliated with the same in Stuttgart to offer students the opportunity of a double degree. Since that constant comparison emerges the real weaknesses of a country that sees a brain drain: “the escape would not be a bad thing,” said the Rector, “if as many foreign students arrived in Italy to participate in research projects”. Because that is the academic world: a continuous flow of ideas that are confronted in a world context.

instead Italy is lagging behind even in research: 45% of the funds come from private sources and 65% in Germany, the country in which, however, the state spends three times as much, 304 million euro against 109 of Italy (303 France) that maintains the eighth place worldwide in terms of quality of publications.

This demoralising photograph, however, is difficult to reconcile with employment data which shows 17.7% unemployed among graduates compared with 30% of non-graduates. And salaries are clearly more appropriate to a decent standard of living.

What prevents universities from restarting are two factors on one side the economic crisis, the other a bureaucratic and cumbersome legal system that imposes constraints and paradoxical spending limits: “All that we save,” said Alberto Coen Porisini, “we must return it to the tax authorities, we also cannot buy benches or chairs because we have an annual spending limit.”

At this rate, Italy will never achieve the Lisbon objectives by 2020 that talk of  40% of graduates given that today it reaches only 17% (against Germany which is 28%, the UK at 42% and France 32%) ” The University is on the decline. Fewer students, fewer teachers, fewer PhDs. The drop in enrolments stood at 130,000 in the last five years, while teachers and researchers reduced by 10,000 units and 5,000 PhDs were lost.

The crisis of the system is obvious: Italy lacks the vocational path, closely followed in Germany and Switzerland, for example.

But also the strategic choices seem to have disregarded the expectations: “We ask that the course of the three-year engineering course does not provide access to the specialist course: the path of an engineer must be 5 years, because the first two years is used to settle a way of being. Those that do three years ago must have other skills, very confused today, ” asked Roberta Besozzi, president of the Order of Engineers of the province taking the floor to criticize the level of preparation of today’s students, often rejected at the exam for the profession.

Plaudits, however, for the academic system came from two former students of Insubria Mattia Aldighieri who got the double degree in Economics in Varese and the University of Stuttgart and Germany Amabile Stefano Degree in Communication Sciences and is now a journalist who works for RAI programs.

A heartfelt defence that recorded only one drawback: in a room with few present, some teachers, a handful of technical and administrative staff and almost absent students.
Who are the rectors speaking for?