“Digitalife, a mosaic of life”

In Varese, on 23 January, the director, Francesco Raganato, explains how the docufilm, produced by VareseNews, with RAI Cinema, came about. 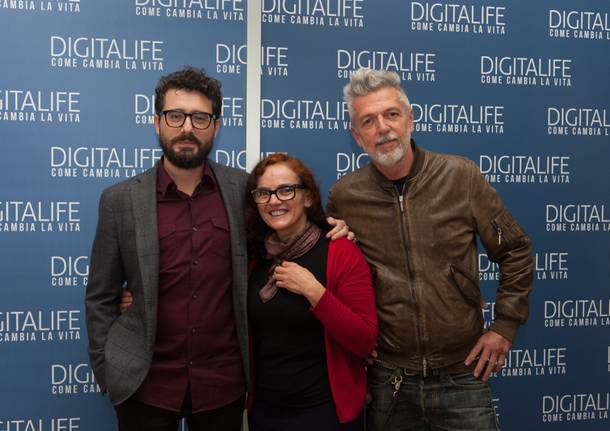 “Digitalife is a film made up of stories. A great number of stories were received by the editorial office, many worthy of ending up in a film. It was the film itself that took over, so the choice fell increasingly on those stories where life played a powerful part. Because that is what Digitalife is about.” This is what the director, Francesco Raganato (pictured left) said about the creative and organisational process that led to the creation of the docufilm produced by VareseNews, with RAI Cinema and the Foundation “Ente dello Spettacolo”. The film is being shown in Varese, on 23 January, at the Impero Cinema (get advance tickets here), and if go to the ticket counter and mention VareseNews, you can purchase the ticket at a reduced price.

Digitalife is about how the Internet and digital technology have changed our lives, and does so with 50 stories sent by people around the world, selected from hundreds of video contributions. “It was a challenge against the conventional language of documentaries, against standard production processes, against classic storytelling,” Raganato went on. “It was a leap of faith and then an ascent. It was a team effort, that’s how it was planned, and how it was made. It’s a mosaic of life, a tale told by several voices, some in tune, some divergent, some safe, some uncertain. But all are sincere.”

“In this sea of attempts, opportunities, ideas, and stories about families, emotions and health, there is us, we’re in it up to our necks, and we’re learning to swim, still clumsy and imperfect, like the pictures that make up the film,” Raganato went on. “What emerges in Digitalife is the desire to tell a story, because, if it’s true that digital technology enables us to connect up more easily, it’s also true that this connection needs to be fed in order to remain strong. Otherwise, we’re just a tiny red number on the notification icon. Digitalife is a collective film, in the most inclusive sense of the term, a film that came about almost spontaneously, with its own times and methods. It was supposed to be a film about digital technology, but in fact, it’s a film about life.”