Sacro Monte, the restoration of the “scalea” of the Sommaruga comes to life

This morning the delivery of the site; in the coming days, weather permitting, the experts at work. The intervention is carried out thanks to an agreement between the Municipality and the non-profit organisation Italia Nostra 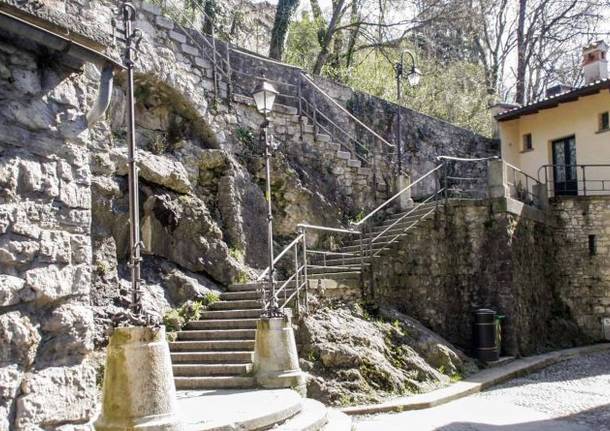 At Sacro Monte this morning, 29 October 2019, the restoration work on the staircase designed at the beginning of the twentieth century by the Milanese architect Giuseppe Sommaruga, one of the most important interpreters of Art Nouveau, came to life with the delivery of the building site.

The intervention had begun in recent months with the removal of some boulders and the stabilization of the nearby slope, but in the coming days will also properly start the more artistic part.

The staircase is located in Via Fincarà, a few steps from the top station of the funicular; its arrangement, whose total value will be just over 11 thousand euros, is made possible by an agreement between the City of Varese and the city section of Italia Nostra.

In detail, the intervention involves the eradication of weeds, the restructuring of iron works, the cleaning of stone works and their subsequent protection, the arrangement of steps and the replacement of lantern lights with other spherical type.

“With this project,” explains the Councillor for Public Works Andrea Civati, “we aim to further enhance the Sacro Monte, giving new light to a work that has been forgotten for too long. There are many concrete initiatives and actions that in recent years are leading to an ever-greater enhancement of our UNESCO heritage. It is also significant that these interventions are often made thanks to the collaboration between the administration and the associations of the territory, in this case Italia Nostra, to which special thanks go.”

The “scalea” is in fact an almost unknown work by Sommaruga: the project, in fact, was attributed to the famous Milanese architect only in the year 2000, thanks to a document found in the municipal archives. To promote the conservative restoration of the work and its knowledge is the objective that animated the proposal of Italia Nostra, with the involvement of the Superintendence.

“For years, the staircase,” explain for Italia Nostra Varese the vice-president Bruno Bosetti and the councillor Massimo Propersi, “required and deserved more attention. Before the restoration could really begin, some important preparatory work was needed, but today we can say that the wait is over. This wait has been shared by several people from Varese: half of the amount needed for the intervention, in fact, has been obtained thanks to a fundraising campaign and an important contribution will also come from the Community Foundation of Varese.”