With backpacks, and boots in the snow, the Carabinieri watch over Monteviasco

A trip to the isolated village, after the tragic cable car accident, with the Carabinieri who go backwards and forwards every day, to assist the residents. 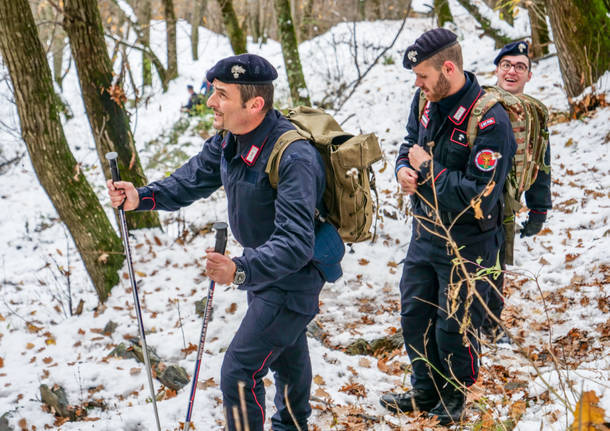 The summit is held as soon as they get to the top. “We’re going to Rosina’s, you go to Augusto’s, and we’ll all meet at Giordano’s.” But this is no round-up, on the contrary. The Carabinieri who have been going to Monteviasco for days, are helping the people who live in the village, checking to see how they are, and bringing them what they need. The little village on the border between Italy and Switzerland has been isolated for about ten days, since the serious cable car accident, when the man who operated and serviced the car, Silvano Dallea, tragically died.

There are no roads that go up there, and with the cable car closed and the old freight lift out of service for years, the only way to get up there is on foot. The Carabinieri from Luino and Dumenza know this very well, because they have been climbing the 1200 steps from the car park to the village, every day. With boots on their feet, berets on their heads and backpacks on their shoulders, this is how the 7 residents in the village have been getting their supplies.

“Today, they’ve only asked us for fresh bread and a few newspapers,” says Marshal Giampaolo Paolocci, as he climbs the path, “but even if they don’t ask, we’ll continue going up to check, until everything’s back to normal.”

They take turns, even though some are used to the climb. Like Francesco Pastore, 25, a member of the Forest Police, and a former member of the Alpine Troops. “I came to Luino 10 days ago,” he says, “and I must have already climbed up half a dozen times.”

Then, there are those who are hardened by this experience. This is the case, for example, of Dario Lazzaro, a 20-year-old from Catania, who has just left the Carabiniere Cadet School in Reggio Calabria, experiencing the cold and snow of Monteviasco for the first time. The expedition is led by Marshal Marco Cariola, who knows these mountains very well. They walk, one after the other, their boots sinking into the snow. “Today, a lot has already melted, but on Monday night, up in the village, there was about twenty centimetres,” said Cariola, a Carabiniere who usually leads the radio car unit in Luino.

It takes about an hour of walking to get to the top, and once they get there, they start the tour of the houses. Whenever a door opens, the Carabinieri are greeted with big smiles. From Rosina, for example, who, at 87, is the oldest inhabitant of the village. “I keep saying I don’t want anything, that I already have everything, that if they bring me anything else, I’ll have to leave the house,” she jokes as she invites the Carabinieri to sit at the kitchen table.

In front of her, there are her two greatest passions, crosswords and crocheting, which she spends her days doing, and “I’ve certainly got no shortage of thread,” she says. In the meantime, the water for the pasta is boiling behind her, on the stove, and Rosina insists that the Carabinieri should stay for lunch, but they decline.

In all of the houses on the tour, the residents offer something, but the answer is always no. The reason is not only, “We can’t, we’re on duty,” but also, and above all, “We don’t know when the cable car will be operating again, so if we consumed something, it would be weight that, sooner or later, we’d have to carry on our backs,” Marshal Paolocci explains. Although, with the firewood and heaters, there is no problem of cold, the problem of supplies is beginning to become urgent. This is something that Giordano understands very well; indeed, in the last few days, he has been thinking about how to feed his thirty goats and four cows. So does Walter, who, after running the Cooperative Club for 8 years, has now had to carry everything he needs home on his back. “With the cable car, we always used that; I hadn’t gone up and down the path for years,” he says as he puts his heavy backpack down in front of his door.

It is a true family, scattered among a number of houses, who live in Monteviasco. A family who, at weekends and in the summer, becomes bigger, and, in the winter and on weekdays, becomes smaller. A family that Silvano Dellea also belonged to, that is now facing bereavement. “It’s nice to see all these new faces and the attention that there is for Monteviasco,” Rosina said, “but we would have preferred to have them here for another reason.”