Varese receives award in Turin for improvements on the running track

Varese has won an award at the 2019 Festival of Technology, in the “Sports venues, architectural section of the Ethics and Sport Prize” 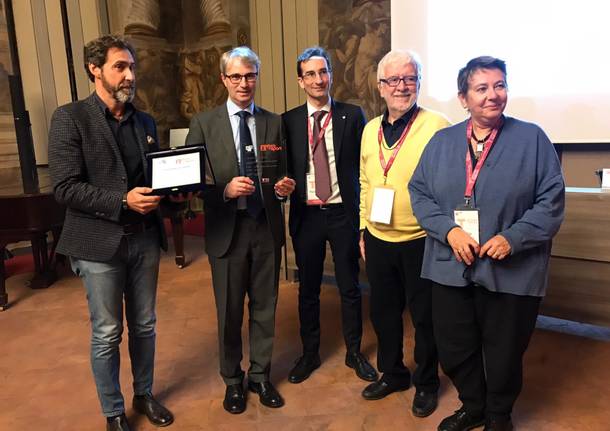 The athletics facility in Varese has received another field-and-track award. Last June, the Olympic-medal winner Stefano Baldini cut the ribbon on Varese’s new running track. Today, some more good news has come from Turin, regarding Varese’s sports facility. Thanks to the recent renovation of its running track and to the completion of its indoor facility, Varese has won an award at the 2019 Festival of Technology, in the “Sports venues, architectural section of the Ethics and Sport Prize.” The award ceremony took place tonight in Turin, and it was the Mayor of Varese, Davide Galimberti, who collected the official plaque.

The jury responsible for evaluating the interventions carried on the sports facilities deemed the work to create Varese’s brand-new athletics facility and new indoor track the best in Italy.

“We’re very proud of this award,” explained Mayor Galimberti. “It acknowledges the efforts we’re making to upgrade the sports facilities and gyms in Varese, starting with those in the neighbourhoods. The athletics track is now of the highest quality, and attracts sportsmen from all over the Province, and just in the last few days, we’ve started work on improving the nearby football field in Calcinate.”

The work to improve the availability of the facility also continues, together with the associations that use it.

The work carried out by the town council included the creation of the new “indoor straight track” (dedicated to Professor Enrico Arcelli), making indoor training possible, which has four, 60-metre lanes, high jump, long jump and pole vaulting. The flooring of the six-lane outdoor track and of the areas for jumping and throwing were also renovated. The track’s lighting fixtures were replaced with LED lights, and the athletes’ changing rooms were refurbished with new electrical and heating systems. The substantial work also entails providing additional, new changing rooms for athletes, by extending the existing building, which will increase the capacity to 60 athletes, who can use them simultaneously, with separate dedicated areas for men and women; the changing rooms for instructors and referees were also renovated. The infirmary was adapted to ensure accessibility for people with disabilities.