Ravo and the new “allegory” in the Courthouse

After the work dedicated to Artemisia Gentileschi, the mural that recreates the baroque masterpiece of Corrado Giaquinto is ready

The scent of colour and the big scaffolding that a little bit reveals the baroque shapes of ladies and children among coming and going of lawyers and policemen, all looking upwards while are going upstairs in the big staircase of the Courthouse in Varese. 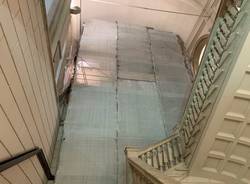 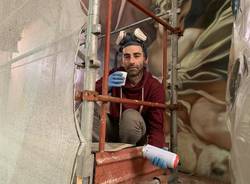 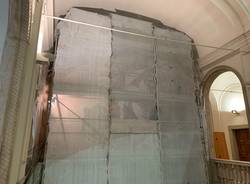 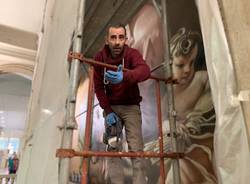 On scaffoldings sketched just before Christmas, are switched on the halogen lights that light up the last marks left by Andrea Ravo Mattoni, artist from Varese, world famous for his mural works that are amazing.

Those who pass, peek. And behind the cloth, you can, as of today, enjoy a partial view of vivid and deep colours: here, the soft forms of a child, there, the roundness of a lady. On the platform formed by boards, there is Ravo squatted, with his mask only just lifted up to enjoy a coffee, while all around the chaos of a little  artist workshop is reigning, suspended and composed of dozens and dozens of colours enclosed in spray cans, “but don’t call me tagger”.

A term that may sound derogatory. That is why Mattoni prefers to be called for what he is, an artist. “Not that I’ve never been a graffiti artist. Yes, I have been, but the work I’m making, like Artemisia last year, is something else.”

On the ground floor, to protect the courtroom of comparisons and pre-trial hearings enclosed in a casket at the service of those who have to answer questions from a prosecutor or to recognise an aggressor, there is the gaze of Artemisia Gentileschi, the great Roman painter of the Caravaggio school who lived between the sixteenth and seventeenth centuries and who was extremely talented in painting and thinking, immortalised by Ravo Mattoni in a wall painting that was inaugurated a few months ago.

Instead, the subject which is almost finished but still to be revealed, is the copy on about forty square metres of wall of “The allegory of peace and justice” painted between 1760 and 1762 – a few years before his death – by Corrado Giaquinto, a painter of the eighteenth century. “The work is substantially finished; I lack the overview that I can only get after removing the scaffolding cover.”

There is no official date for the inauguration yet, but it will most likely take place on 20 January in the presence of the authorities. Ravo, 38 years old, from Luvinate, is an artist that is appreciated all over Europe, “but this year I’m going to work very close to home: I’ve become a new dad a few months ago”.