Fifty partners to save the bookshop, enabling Boragno’s dream to continue

The forthcoming reopening of the shop is the “result of a crazy idea that turned out to be the right one.” A group of partners are taking over the business, and it is they who will decide on how to transform the historic bookshop. 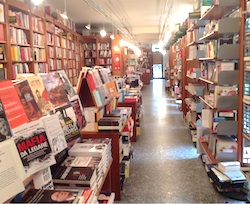 “Once realised, even the craziest projects can seem a breeze,” said a smiling Francesca Boragno, as she thought back to the months when her bookshop remained closed. Now that it is all about to start again, now that those tough months are behind her, now that a new company is ready to take over the historic bookshop in the heart of Busto, “that crazy idea turned out to be the right one.”

It was in March when a sign and a bare public notice announced that the wooden front door of the bookshop yard would not be opening for a long time, “and during these months, a lot of ideas went through our heads.” There were also a lot of demonstrations of esteem and calls to start all over again. “The fact that someone wanted my bookshop, always gratified me,” and for this reason, its fate continued on a double track. On the one hand, there were the negotiations with the person who wanted to take over the bookshop, and on the other, in silence, a group of people, who intended not to let the project die, began to form. Hence, the idea of ownership by the people.

Each partner has contributed €5000, “which isn’t an excessive sum,” and which will enable everyone to have a voice in the new business, to decide the bookshop’s future. Of course, when the number of partners could be counted on the fingers, “we were little worried, but today, we’re ready to start again,” with already 30 people who have completed the bureaucratic procedures. “And there are others who are about to do it.” And if the shares still available are not allocated, the Boragno family will provide the missing sum.

“I don’t want to see the return of the bookshop as my personal victory,” Francesca explained, “but as the result of the work we’ve done over 3 generations.” It is this work that transformed the court at No. 4 in Via Milano into a genuine cultural centre, with displays, presentations and exhibitions. And now everything will be in the hands of the new partners. “They’re the ones who will decide what to do with the bookshop, how to transform it and make it competitive.” Because it needs to be transformed. “I myself was thinking of a lot of new things before the situation got so bad,” Francesca explained, because “we have to stand up to the giants, and rethink the very idea of books.” The books never left the shelves. Since the shop windows were covered up, “it was as though time had stopped still here inside.” But it will soon be up and running again. It all depends on the partners.