Coating finance with ethics is not necessary. Ethics should be practiced

From Pope Benedict XVI’s Caritas in veritate encyclical, to the warnings of Pope Francis, via the protest movements against finance without rules. At LIUC, they examine the conscience of investors. 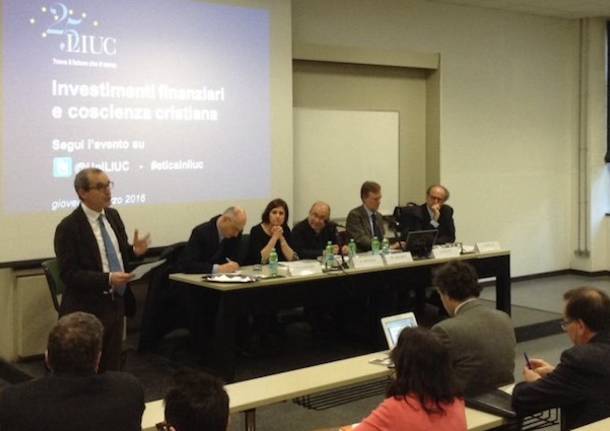 During the crisis, we often heard it said that we need more ethics, clear rules and transparency in finance. This need has not been satisfied at all, if we consider the latest scandals involving a number of Italian banks, and what emerged during an interesting meeting organised by the LIUC University in Castellanza, on the relationship between financial investments and Christian conscience.

Distinguishing between what is ethical and what is not, when talking about an investment fund, is by no means easy. “There are three approaches: exclusion, inclusion and involvement,” explained Pierluigi Molla, an accountant and auditor. “They can be used individually or combined, but this is not enough to ensure that a fund is ethical.”

According to Eliana Minelli, a lecturer in business administration and promoter of the initiative, together with Don Michele Aramini, an investor must find strong points of reference in his daily choices, because the only thing that determines what is ethical in finance from what it is not, is the investor’s conscience. In this regard, Molla quotes a poem by Pope John Paul II. Forced to work, when he was young, in a Polish factory that made components for arms, the future pope wondered if he, too, as a lathe operator making “tiny screws” (so the “fragments of devastation”) was, in some way, contributing to the horror of war.

So, ethics in economics is not a question of quantity, but of awareness of one’s role in the overall system. And the fact that, of the $70 billion invested in funds, the percentage in ethical funds is still too low, even though the return is in line with other funds, suggests a deficit of awareness of the destination of the money invested.

When we speak about finance and ethics, ambiguity is always lying in wait. Paolo Tenti, who is an expert in ethical funds, remembers that, in his marvellous (in terms of depth, clarity and form) encyclical “Caritas in veritate”, Pope Benedict XVI warned against the excessive use of the term “ethical”, and to watch out for banks that put forward so-called “ethical funds”.

There are many other positions, some borrowed from Christian experience, some, from secular, between an economy based on people-friendly ethics, sought by Pope Benedict XVI, and the unbridled liberalism of the Nobel prize winner Milton Friedman, for whom profit is the only objective and limit. In his interesting report, Tenti analysed all of them, from that of the Franciscan monks, true pioneers of the market economy, to the recent campaigns and opinion movements that oppose certain types of investment.

Valter Lazzari and Federico Visconti discussing the role of the market

“There’s a passage in Pope Benedict’s encyclical where it says that financial dealers must rediscover the genuinely ethical foundation of their activities, and that the right intention, transparency, and the  search for good results are mutually compatible and must not be separate,” Tenti said.

Making ethics a business is a formula for failure. Ethical behaviour in finance cannot be a superficial thing, so it is essential to give depth and above all effectiveness to some concepts in order to avoid cases like those of Banca Etruria and the energy multinational Enron, which produced great social reports, despite being the main player in the largest accounting fraud in history.

“Finance should not be demonised, because it is the true lubricant of the economic engine and of the market, and an engine cannot work without oil.” According to Valter Lazzari, a lecturer in Financial Brokerage at LIUC University, finance makes the market efficient, it helps it to work better. “The market is the best mechanism for coordinating people,” he explained, “because it allows freedom of choice and is a factor of growth and development for the company. Ethics makes it easier to coordinate these behaviours.”

On the ability of markets to regulate themselves and the role of finance as a “lubricant”, the Chancellor of the University in Castellanza, Federico Visconti, raised several doubts; referring to the words of Pope Francis concerning the need to develop an economy that works for everyone, he responded to his predecessor, “I’m a business economist, and frankly I’m closer to the foundries than to Wall Street.”