The murals that pay homage to Caravaggio are hiding a secret

Interview with Andrea Ravo Mattoni, a Varese artist known throughout Europe, who produced the murals in Viale Belforte that are winning over passers-by and the Internet. 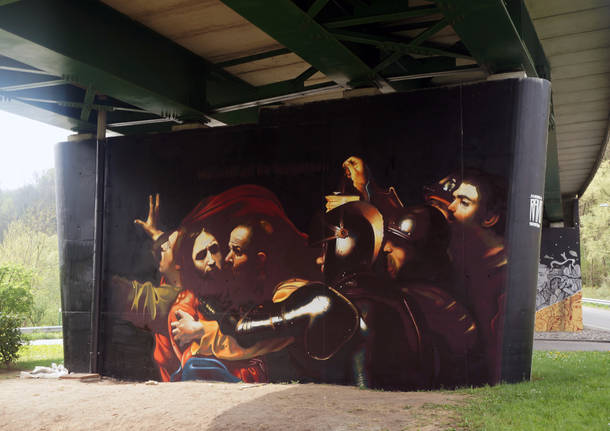 The new murals by Andrea Ravo Mattoni, painted on one of the columns beside the roundabout in Viale Belforte, on the road that leads to the hypermarket Iper, was inspired by a painting by Caravaggio, “The Taking of Christ”, and it hides a secret. 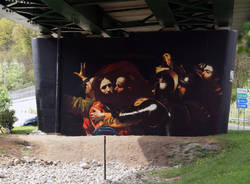 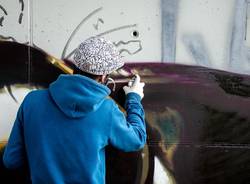 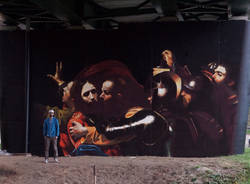 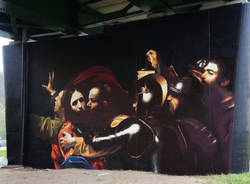 The Varese artist, who is known throughout Italy and Europe, produced the painting, which leaves passers-by “speechless” and receives “likes” on the Internet.

“Since last night, I’ve been receiving messages on Facebook from people thanking me for the painting,” he said.

On the wall, Ravo reproduced images and colours from the striking painting, leaving the phrase, “We will all be forgotten”, to be noticed by an attentive eye.

The two choices, that of the painting and that of the phrase, are closely linked. “I chose to reproduce that painting, because it has a very curious history; it had been forgotten for 400 years, and was only brought to light in 1990, thanks to Sergio Benedetti, the curator of the National Gallery of Ireland, who had been given the task of examining it.”

This is a story behind the almost hidden phrase, which can be seen when the light is behind it: “Macrocosm and microcosm, everything will be forgotten. This phrase has a positive and reassuring value for me. It allows mankind not to have to be somebody or to do something memorable. It’s a cancellation of ego; we are an extremely egocentric society, we’re continually forced to demonstrate something. In this sense, remembering that everything will be forgotten can be reassuring.”

The mural was created thanks to the association WgArt, as part of the “Urban Canvas” project, which, over the last few years has allowed nationally renowned artists from Varese to leave a drawing in their town, and to involve writers from all over Europe. Indeed if you look around, you will find the signatures of Sea Creative, Luigi Vin Semeraro, Etnik, Kraser, Urbansolid, and many others.

“Art is a public asset, and it must be accessible and free for everyone,” Ravo said. “In my opinion, this is the most important thing. We’ve been ‘fighting’ for years to get walls that we can draw on, and there are never enough. I hope the authorities and private individuals pay more attention, also to this form of art.” There is one of his self-portraits in the subway in Via Milano, and another of his drawings on the walls of the Masnago Stadium.

In 1995, he started to paint with spray cans, he founded Crew HBM together with Vine, and subsequently, began to collaborate with Seacreative, Refreshink, Borse and Kraser. He received his diploma as an electronics technician and enrolled in the painting course at the Brera Academy of Fine Arts, in Milan. In 2003, he founded the BAG art factory, an artists’ collective based in Bovisa, Milan. In 2008, he moved away from the collective and started working as an assistant for the curator, Manuela Gandini, of Artandgallery. In 2010, he started collaborating with the art gallery Silbernagl Undergallery, which is based in Daverio and Milan, and with the Square23 Gallery in Turin.