The Agostini Prize to Tiziano Scolari, for the story of “Pimpa the Clown”

The story of the clown who tries to make children laugh in war zones has won first prize in the journalism competition. The winner: "I'm donating part of the prize money to him." 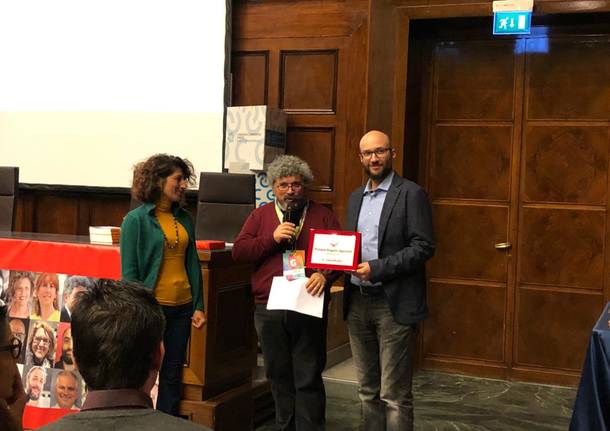 The 2019 Angelo Agostini prize has been won by Tiziano Scolari, a video maker with the Italian TV channel La7. The prize, which is dedicated to the memory of the journalist Angelo Agostini, who was a great innovator and a link between the academic and professional worlds, has gone to the best video-inquiry on the theme of “Local meets global”.

The subject of the report is a young man from Varese Province, Marco Rodari, aka ‘Pimpa’, who, over the years, learned to be a clown, and who makes children of Syria laugh. The city of Aleppo, which was devastated by bombs, is the backdrop for the children’s smiles. The journalist, who received the prize from Agostini’s wife, Angela Prestifilippi, and who was visibly moved, received a plaque and €1000.

“Part of the money will go directly to Pimpa,” Scolari said. “I really like this report, it’s an example of local becoming global. We can all, in our own little way, do something to affect the macro.” The report also aired on 19 April 2017, during the program L’Aria Che Tira, on La7, and you can watch it below, or by clicking on this link.

Second place went to Niloofar Yamini, with the project “On the Border“. This documentary, which was made in Afghanistan, tells about the lives of people who live on the edge of the desert without water, security or identity, and who dream of learning an alphabet, in order to be able to talk about their lives. The video is available here.

Third place went to the project “Natives against Big Fish”, by Paola Rosà. The documentary tells the story of the struggle of a small community of natives on the Pacific coast of British Columbia, who stand up in defence of wild salmon, a resource traditionally linked to their livelihood, and fight a Norwegian multinational. The video is available at this link.