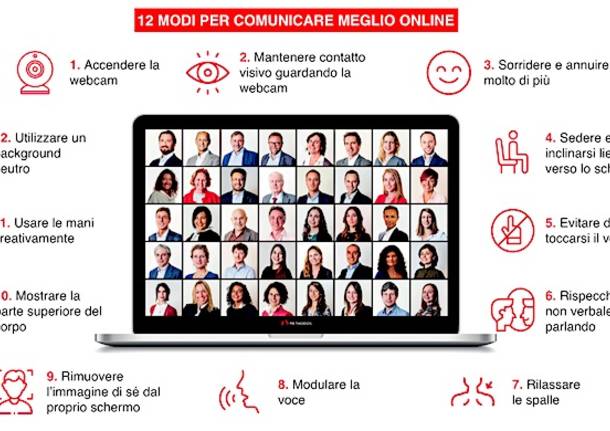 Would we go to a meeting disguised as Spider-Man or Batgirl? Would we have an interview in a large box? Keeping the webcam on or not is just one of the many challenges posed by virtual communication with Zoom, Teams, Meet and other communication platforms. We have to learn to make the best use of the new video channels and reduce the stress they impose on us because of the limited non-verbal support and the cognitive discordance of being present and distant at the same time.

Remember that the non-verbal has important effects that enhance and reduce the effectiveness of communication. According to Edward G. Wertheim, author of The Importance of Effective Communication, there are 5 dimensions that can come into play:

– Repetition: emphasises and reinforces the impact of what is said

– Contradiction: may indicate to those who pay attention to non-verbal signals, some inconsistencies between what is said verbally and what is actually believed, known or true

– Substitution: our body can say things we don’t say in words, for example with our gaze we instill emotions – Complementary: for example if we say we are not interested in continuing and turn our head elsewhere

– Emphasising: when we move a lot we transmit energy, enthusiasm

While the reason we are so tired after one (let alone 10) video calls is the dissociative effect, well explained by Gianpiero Petriglieri, associate professor of Organisational Behaviour at INSEAD. “The plausible deniability of mutual absence. Our minds are cheated by the idea of being together when our bodies feel that we are not. The dissonance is exhausting.” He adds: ” It is easier to be in each other’s presence, or in each other’s absence, than in the constant presence of each other’s absence. Our bodies elaborate so much context, so much information, in presence, that communication on video is a strange kind of blindfolded encounter. We perceive too little and cannot imagine enough. This deprivation requires a lot of compensatory conscious effort”.

We offer some tips to consider in order to increase the quality of mutual experiences during two-way video calls and remote meetings, both business and private.

Watzlawick, communication psychologist, shows us the reasons why it is generally a good thing turning on the webcam, when we connect with others. First: it is impossible not to communicate. Communication can be unintentional or ineffective, but cannot, just not exist. There is always an exchange. Even behaviours send a message. Being “turned off” risks to communicate ambiguity, disinterest, boredom, fear, distance. Second: communication happens through two channels, non-verbal and verbal communication. The congruence between these two helps us to interpret, to verify the comprehension, to strengthen the expressed contents. Without the non-verbal communication, we risk to flatten and distort it. Third: communication can be symmetrical or complementary, when we do or do not consider us at the same level. Turned on webcams create a more friendly and equal situation, that helps us to be closer. So, if the connection permits, let’s remove the hood and turn on our face.

One of the reasons why we don’t keep the webcam on is that others can see at any time when we lose attention. We can of course look away, check our phones, read our email, knowing that this would not be appreciated by the people we are communicating with. So, if we want to be really present and make this clear, it is essential to turn on the webcam and use it in a good way. Bringing the PC up to eye level, raising it with a specific support or even just a solid book for example, helps us to keep our gaze on the webcam, which in Zoom is equivalent to maintaining direct eye contact as if we were in presence, because the movement of the pupils is perceived immediately. Eyes are the window of the soul, and we can occasionally accentuate a mood by opening them wide, winking, frowning, rolling and so on. Neurolinguistic programming helps us to deepen this fundamental ability to both express and decode the unconscious behaviour of others, which happens quite often, by classifying the link between eye movements, thoughts and emotions. Or we can attend a course in haemotusology, the technique that studies and analyses the emotional behaviour of the face – involuntary micro-expressions, investigating the behaviour of human subjects from the emotional point of view, created by Paul Ekman and which inspired the famous Lie to me series, starring Paul Roth.

According to a recent studio made by the Tampere University in Finland, a videocall has the same psychophysiological effects – trust, compassion, warmth – than a presence interaction. If we want to communicate attention, we need to send more signals about our focus on what is said, more than we would do in presence, smiling and nodding more frequently. Using “ah, mhm, er”, so-called backchannels, is rarely used, or even never, during videocalls. So it is essential emphasising visual aspects to have the same result. In particular, moving your head as a sign of assent, speeds up the valuation of who perceives the communication, and transmits active listening. Obviously, pay attention to cultural aspects: in India, the nodding movement is horizontal.

Sinking into the couch communicates lack of energy and emotional distance. Sitting with the straight back transmits self-confidence, calm and clarity. Sometimes, tilting forward even just a few grades towards who is speaking, mime the gesture you would do in presence to demonstrate our interests; whereas moving away a little bit increasing the space around us makes easier underlining inspirational and visionary messages, that opens to imagination.

There is a common perception about the negative significance (ex. Insincerity, uncertainty, boredom) of touching your face and head generally. Even if it’s not necessarily true, trying to avoid it reduce the potential of this unconscious interpretation.

Mirror neurons induce us to do this instinctively in presence to build rapport and demonstrate understanding and empathy. We can deliberately replicate this behaviour by following the posture, gestural rhythm and tone of voice of our interlocutor, particularly in two-way meetings.

With shoulders tense and curled towards the ears we communicate frustration and discomfort. Better to relax them and lower them together with the upper arms to restore relaxation and contentment. We also pay attention to the shoulders of others to intercept signals that it is time to take a break.

Tone, volume, inflection and cadence have a strong influence on the perception of what is being said, especially in an environment where other signals are absent or muffled. Putting commas and exclamation marks in our speech with voice modulation and pauses is an art to be perfected on video.

Communicating through video requires a lot of concentration and therefore fatigue. In particular, constantly seeing oneself reflected is unnatural and induces constant self-judgment which can undermine self-confidence. If the platform we use allows it, removing the frame of our webcam, leaving it visible to others can help us. And if we don’t know or can’t turn off viewing for ourselves, we take a post-it note and cover it up.

A highly popular TED speaker uses 465 hand movements during a 15-minute talk. Twice as much as the average speaker. If and when the situation allows, sitting at a distance that allows us to frame the head, arms and torso, allows us to channel a good deal of our body movements.

There are some things available for free that can also be done remotely: giving a high five to highlight an achievement, or answering a quick YES/NO quiz. Lastly, it is also important to take a nice break between calls to recharge your batteries.

The enigmatic smile defines the Mona Lisa. But the pastoral background creates a sense of eternity and depth that makes her even more unsurpassable. It is better to choose a background without dominant laden images, which pull focus away from us and can make us perceived ourselves as untidy and mentally inattentive. Beware also of some choices that can negatively emphasise the virtual dimension. If we do not have the bed in which we sleep behind our backs, the neutral vision of our real remote workspace helps to increase the feeling of transparency, thus reducing the emotional distance. Otherwise we can create an ad hoc background recalling the context in which we are operating, who we are and represent, the rules to be followed during the meeting, or become the excuse for a storytelling (travel photography, passions, favourite book, brand promise, course title.) In any case, we have to check the colour tone of the overall effect of the chosen background, because it has a direct impact on the emotional perception of the viewer.

Building relational trust at a distance requires considerable effort. Making the best use of the non-verbal and the visual context in its entirety help us a lot to communicate more effectively. “It’s not what we say, but how we say it that makes the difference.”

In dozens of expeditions, the photographer portrays the terrible reality of the plastic waste emergency

They look like images from another planet, almost alien and beautiful, despite the fact that they portray a terrible reality such as the tons of plastic thrown into the sea. These are Mandy Barker’s photographs, taken in dozens of international expeditions that make for a gut-punching exhibition.

It is called NET and it is a project born by the synergy between art, scientific research, a declaration and a proposal for action to protect the seas. The photographer’s images bear witness to the plastic waste emergency in the oceans, poetic images where plastic sneaks into deep-sea life with disturbing ease.

It is a work of great emotional impact coordinated by the CNR Institute of Marine Sciences  research institute in Venice: marGnet, an innovative and interdisciplinary system which combines mapping systems, recovering and converting plastic waste spread on the seabed, with the possibility of transforming it into low-cost fuel for boats. Goal of the projects is to give new solutions to plastic littering, in terms of sustainability and circular economy, especially in the fisheries sector.