Leonardo: improvements in the accounts, critical problems for the helicopter division

Deposition by Mauro Moretti, the CEO of Finmeccanica, to the Commission on Production Activities of the Chamber of Deputies. The PD MP, Angelo Senaldi, requested explanations about Agusta Westland and Alenia Aermacchi. 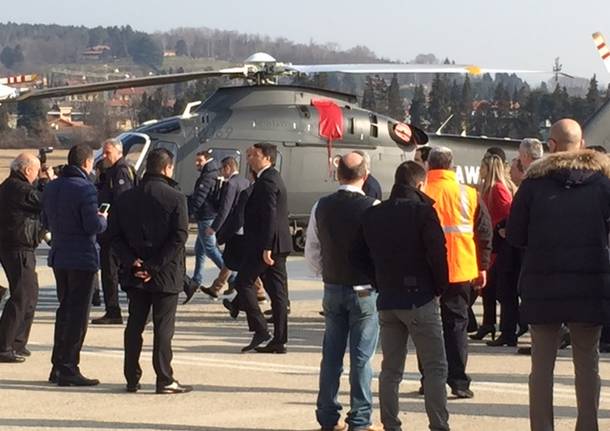 A deposition was given, to the Commission on Production Activities of the Chamber of Deputies, by Mauro Moretti, the CEO of Leonardo – Finmeccanica. The PD MP, Angelo Senaldi, a member of the commission, requested general explanations, and regarding two companies in Varese Province, Agusta Westland and Alenia Aermacchi.

An initial positive point that emerged was the improvement in the Group’s accounts, with a stable return to positive results, and a reduction in the debt, which now make investments in technology and research and development possible. At the same time, it was guaranteed that historic brands with commercial value will remain unchanged, despite the Group’s new registered name, Leonardo – Finmeccanica.

“There’s no danger of a brand like Agusta disappearing. The guarantee of considerable investments in the production of some helicopter models, and above all, in the definitive launch of the convertiplane AW609 also shows that Leonardo – Finmeccanica wants not only to maintain Agusta products but also to relaunch them. A similar point has been made about investments in Alenia Aermacchi,” Senaldi explained.

Moretti also gave assurances concerning the problem of the centralised supplies, which could make the production process rigid and restrictive, and explained that these only concern consumable parts. Thus, the production process is not affected by a change that is clearly intended to create economies of scale.

“The CEO did not hide any critical points affecting the helicopter division, which are due, above all, to a drop in the general market, which was felt less by Augusta than by its competitors, but which led to a reduction in the number of orders. Of course, the determining factors include the low price of oil and a currently relatively low mining activity, which affects a specialised company that is a leader, among other things, in the production of helicopters for oil and gas platforms,” Senaldi continued.

“The problems, which extend to the whole sector, should indicate the temporary nature of the situation, although it is undeniable that Augusta was affected. In my opinion, it is important that the company is part of a group that can deal with such circumstances better, with internal offsetting. In general, the new structure of Leonardo – Finmeccanica, organised into divisions, seems more rational than the previous one, and able to manage relationships with suppliers better (a number of negative examples were given, but they did not relate to our province).”

Angelo Senaldi summarised his conclusions concerning the deposition by the CEO, Moretti. “We need to keep an eye on prestigious production companies that are important in terms of employment. However, our attention must be objective, to determine whether the current problems are permanent or temporary, whether they are due to a market phase or a transitional period of reorganisation.

We have to follow and manage the evolution of production processes as much as we can. A genuine industrial revolution is taking place, that of Industry 4.0, which will progressively shift the task of “doing” in the company to machines. At the same time, the role of knowledge, so, of training and retraining staff, will become even more crucial. Both Alenia-Aermacchi and Agusta-Westland will benefit if the European Union finally adopts a common defence strategy and a common army, with equipment in common, to implement its political decisions and guarantee orders for companies that, otherwise, would be too exposed to the dangers of a market in which there are much larger competitors, with much larger turnovers, than Leonardo – Finmeccanica.”