Varese will be the protagonist next weekend, in four events on 10 and 11 November, at the Teatro Nuovo in Varese, and Palazzo Estense. Here are all of the events. 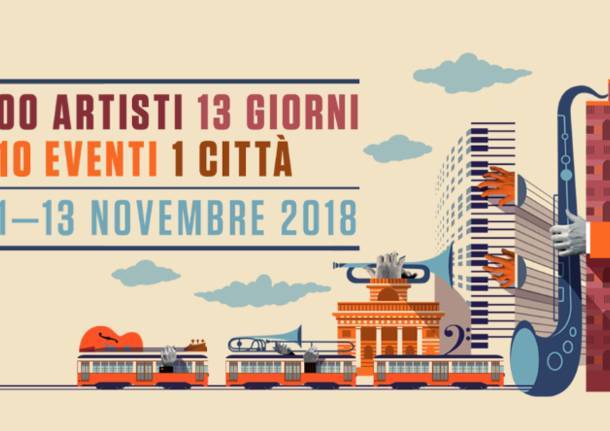 Varese’s JAZZMi weekend is approaching, now in its third year; it was created to present all aspects of the musical universe of jazz: its history, its relevance, its future, the genres with which it communicates and with which it contaminates. Thanks to the collaboration between Milan and Varese, this year, for the first time ever, the notes of the typically Milanese concerts and shows will also be heard in Varese. In Milan, the concerts have already begun, with record audience numbers and several sold out in the first few days. Varese will be the protagonist next weekend, with four events on 10 and 11 November, at the Teatro Nuovo and Palazzo Estense.

On Saturday night, Peppe Servillo will perform, as part of a tour of songs by Battisti and Mogol, with jazz arrangements by Javier Girotto (wind), Peppe Servillo (voice), Fabrizio Bosso (trumpet), Furio Di Castri (double bass), Rita Marcotulli (piano) and Mattia Barbieri (drums). It will be an evening of great theatre, because Battisti’s lyrics and enveloping music communicate with us deep down, and still move us.

However, on the programme in Varese, there are also jazz concerts during the rest of the weekend, with Redi Hasa & Rocco Nigro, and JAZZ LAG, who will play the great classics of jazz and swing, from Louis Armstrong’s Jazz to the glories of the Swing Era, with the occasional foray into the world of pop, with compositions by the great American and Italian masters. On Sunday, there will be space for children in the Salone Estense, with Massimo Serra, the drummer of the Treves Blues Band, with whom he opened Bruce Springsteen’s concert at the Circus Maximus, in 2016, who, for over 15 years, has taught in schools and has made musical instruments using recycled materials.

Over 180 events and more than 500 artists, thirteen days, with concerts by great Italian and international musicians, exhibitions, meetings, workshops, collaborations and many new features. JAZZMI is a network of synergies that work together to grow, develop and spread jazz. JAZZMI is organised by Ponderosa Music and Art, Milan City Council, the Triennale Teatro dell’Arte and Blue Note, and this year, in Varese, together with the BeatMI Association, in collaboration with Varese town council. The events in Varese will be split between the Teatro Nuovo and Palazzo Estense.

THE 2018 JAZZMI PROGRAMME IN VARESE

New pieces inspired by essentiality, that evoke ancestral sounds, uniting the two sides of the Mediterranean, with results that closely resemble contemporary music. The duo play a repertoire of new pieces and unusual melodies, compositions inspired by a search for essentiality. Musical roots that unite the two sides of the Mediterranean, evoking ancestral sounds that draw from the great tradition of the Balkans and of southern Italy, and lead to results that are very close to the inventions and atmosphere of the best contemporary music.

One of the most charismatic performers of the Italian song, Peppe Servillo, five excellent jazz musicians and above all a refined poet like Lucio Battisti. This concert will undoubtedly translate into an evening of great theatre, because Battisti’s lyrics and enveloping music communicate with us, deep down, and still move us.

Peppe Servillo, the third of four children, was born in Arquata Scrivia, a small village in lower Piedmont, on 15 October 1960. That year, the Servillo family had just left Caserta and arrived in Novi Ligure, on the border with Liguria, with the eldest of the 4 children, Nando, and Toni, who was just one year old. Peppe Servillo has been the frontman of the famous Italian group Avion Travel since 1980. The group became known to Italian audiences in 1987, when they won the Sanremo Rock Festival, with the single Sorpassando. In 1996, they composed the soundtrack for Hotel Paura, a film by Renato De Maria, and the following year Avion Travel won the Critics’ and Jury Awards for quality at the Sanremo Festival, with the song Dormi e sogna.

The little ones will discover how to create real musical instruments that work perfectly, using waste material such as paper, cardboard, fabric, ropes, plastic, leather, rubber, wood and metal. They will be guided by Massimo Serra, the drummer of the Treves Blues Band (who, in 2016, opened Bruce Springsteen’s concert at the Circus Maximus), who has taught in schools for over 15 years, and made musical instruments using recycled materials.