I bring a smile to the war-victim children

Marco Rodari, whose stage-name is Claun Pimpa, has presented his book “La guerra in un sorriso”(TN: A world in a smile). It is a collection of thoughts written instinctively under the bombs in Gaza and in the devastated Baghdad 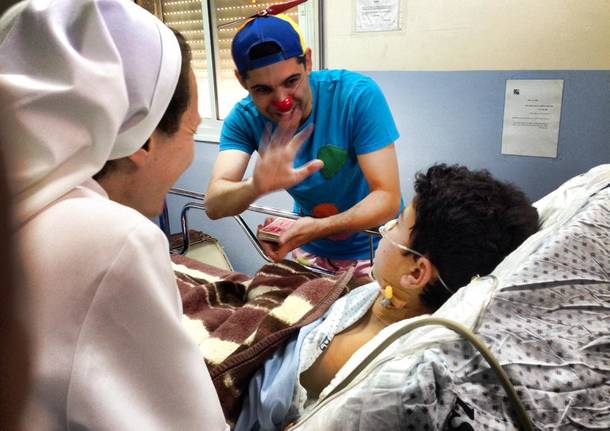 He is a clown. He tours with his red nose in order to bring a smile to suffering children. Marco Rodari, whose stage-name is “Il Pimpa” chose some time ago to help the most desperate children that have been injured in body and soul by a world that refuses their childhood. 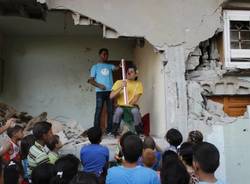 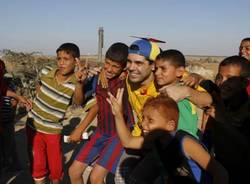 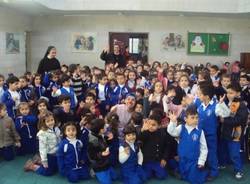 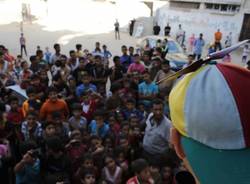 He has been passing many months in the war zones for years, in Gaza or in Iraq, everywhere he could be a help. He has spent nights and days alongside the population, under bombs, and alongside the injured. It is an experience that fills up eyes and heart, many times, too much. Therefore he looked for a refuge from so much horror: a roof, a window on the nothing, a silent garden. It has been in those breaks that Marco has started to jot down some thoughts freely with his mobile phone, words to give a sense to so much illogicality, searching for a way to keep himself able to make a child smile.

Those sentences, that has been liberating and therapeutic, has been collected in a book called “La guerra in un sorriso”(TN: War in a smile) that Marco has published and whose revenue will keep on supporting his far friends, to whom he is bound by a true fondness: “We can’t understand in depth what the horror is until you smell it. We can’t understand desperation and fear until you taste death. He first went to Gaza, a full summer under the bombs, then in Iraq with the obsession for the daily terrorist attacks. In Italy the news of these bombs that exterminate the population no longer arrives, they are still too many: ten, fifteen per day. Those that flee from Syria, and from Iraq bring in the eyes an uncontainable torment. Those that flee are desperate and are willing to do anything just to go away from so much horror. I have seen, I have heard, I have known them and I can’t shut up”.

So these thoughts, accompanied by the images shot by his friend Yazan Da Vid, are now the outline of a tale that witnesses what he has seen in the summer 2014 in Gaza and in many journeys between 2013 and 2015 in Iraq. He did last one last Christmas.

In the book it is told the war and the poverty. However there will still be hope as long as  a child will make a smile. “I am not a politician and I’m not interested in international games. With this book, I want to exhort people to think about what it is happening in those countries, to tell their dramatic everyday life, with bombs falling and in contact with the ISIS. I gave only images, without having the possibility to transmit smells and noises that have a great importance in that everyday life. For those reasons, I preferred to publish those thoughts of mine jotted down in the way my gut told me, without filters, because the gut is the only part that survives the war where reason and heart are overpowered.”

The book was self-published and people who collaborated, did it for free because all the proceeds, once the printing costs will be paid, will be allocated to the project for children.

“There are two things that we in the West don’t understand: the first is told in a story that I’ve heard and concerns the conquest of Mosul by Daesh. The inhabitants of Mosul are two million and, overnight, were conquered by Al Baghdadi. There wasn’t a war, and neither a conflict: the stationed soldiers of the regular army simply laid down their arms. All of a sudden, they felt like strangers in their own country, without a home and without identity. They were erased in their existence. The person who fled is a ghost who has nothing left, not even a role in the earth. In a few hours they moved from a condition in which they had a normal life with a job, a family and a house to a condition in which they are nothing. When they get in the barge they are no longer people, they are ghosts of a society that took their role away.

A lot of them fled through the desert without water and several died. Such stories, as well as the small heroic acts that I witnessed in Gaza make each judgement on others void. We can never know what the luggage of pain that everybody take with them is: when facing such experiences, each certainly teeters, good and evil get muddled and each reference point gets lost.”

Marco will be in Leggiuno the next 16th April at 21:00 in San Carlo theatre and the 17th April at 17:00 in Castellani theatre in Azzate. “ There will be events in the company of two great teachers of mine: Don Silvio Mantelli, who is called Mago Sales, and Margherito Clown, who is Marco Airoldi, together with all of the clown doctors of “I colori del Sorriso Vip Varese”.