The history museum that speaks digital

M9, which chooses to tell the story of the 20th century through multimedia and virtual reality, opened last Saturday, 1st of December, in Mestre. 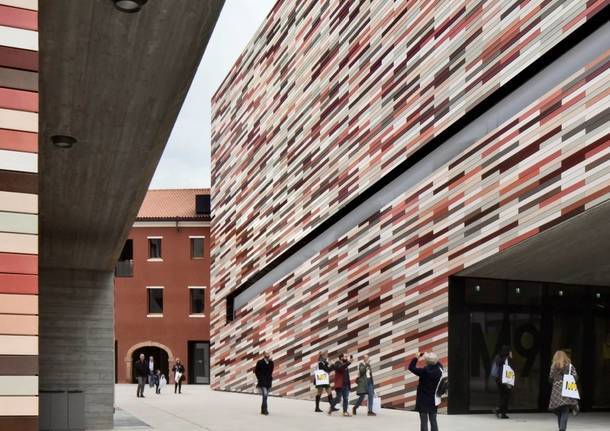 This is a museum which was born from technology. It is an important challenge for a reality that aims to reread the Italian history of the 20th century. Last Saturday, in the heart of Mestre opened M9, a unique museum in Italy, which is inspired by the most innovative international projects and wants to design a new culture starting from multimedia.

This is a museum of a thousand colors that really cover the facades of the new architecture with 20,000 elements of polychrome ceramics.

The story is based on the suggestions of technology with immersive settings where the public becomes the protagonist, where it is possible to relive the experience of an anti-aircraft shelter or meet the holograms of Togliatti and Craxi. Intangible scenes were created with the most sophisticated technology that has also made it possible to build a multimedia archive with staggering figures: 6,000 images, 820 videos, 500 scans of posters, newspapers, documents and 400 audio files.

The visitor is therefore absorbed in the changes in culture, lifestyles, natural and urban landscapes, science and work that have characterized the acceleration that history has given to the 20th century, up to the present day, and is led to understand the movements of the population, economy, politics that form the basis of these changes and that have interacted with them.

Technology, however, is known to age quickly and the real challenge of the Museo del Novecento M9 will be to keep up with the times, constantly renew itself and become a truly dynamic museum that does not chase the future but anticipates it.