“Pasquacanestro Varese”: it is time for the “Garbosi Trophy” and the “Young Legends”

Ville Ponti was the venue for the presentation ceremonies of two youth tournaments, which are in their 40th and 30th years, respectively. On Wednesday 17th, at 8.30 p.m., in the Chamber of Commerce, a conference with Charlie Recalcati 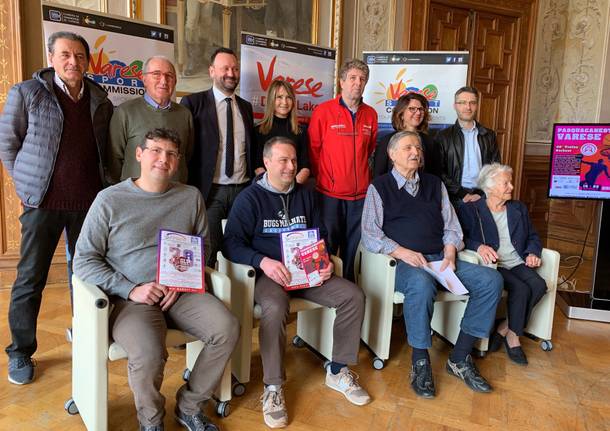 One of them (the older of the two) is in its fortieth year. The other, which although younger, is decidedly “of age”, is thirty. And for the first time, they have appeared together, after years of taking place in parallel. This morning (Tuesday 16th), the “Garbosi Trophy” and the “Young Legends”, the two great youth basketball tournaments that are an established tradition in our province, over the Easter holidays, enjoyed the first official moment at Ville Ponti, an occasion on which to reveal what is new and to emphasise the desire to work side by side, while remaining (and rightly so) two distinct tournaments.

The two tournaments were united under the appropriate banner “Pasquacanestro Varese” (“Easter Basketball Varese”), and received an assist from the Varese Sport Commission, who have decided to give prominence to events that, every year, bring thousands of people, young athletes, their families and managers, to our province. The young people are given accommodation by the families of the local players, but it is clear that, in these cases, there is a considerable amount of associated business, in many areas.

This year, the week dedicated to youth basketball will begin with something new, a conference, organised on the Wednesday evening (at 8.30 p.m.) in the Chamber of Commerce, with a number of exceptional speakers: the former coach of the Italian team and the coach of the Roosters, Carlo Recalcati, the former players (also for Varese), Andreas Brignoli and Marcelo Damiao, and (planes permitting) the Education Minister, Marco Bussetti, who, for many years, was a player and coach in the world of provincial basketball. Then, after the “speaking event”, the start of play, with the usual flurry of games on a long list of courts scattered throughout Varese Province.

For forty years, Paolo Vittori, who was recently made a Knight of the Republic, has put the same enthusiasm into organising the “Garbosi Trophy”, which is dedicated to the memory of the coach who, in 1961, took Varese to its first championship victory. “It’s the triumph of youth, of friendship and of all the memories the young people will take away with them,” Vittori explained, while sitting beside an emotional Miriam Garbosi. “The tournament is a sports competition, but above all, a party for all of the young people taking part.”

The former small forward of the Ignis and national basketball teams, who was decorated with a Knighthood a few days ago (“That day, there were two Nobel-prize winners next to me; they gave it to me because of my work for youth basketball”), mentions the numbers, which clearly move him: “Seventy six teams, 8 foreign ones, 157 games. In total, 18,000 people involved in various ways,” and so on, occasionally interspersing the numbers with thanks and the occasional request for money (“We don’t even get a little cup from the Italian Olympic Games Committee. Not to mention the piles of books they’ve got rotting away that we could give as prizes.”).

This year, the Memoria Garbosi is divided into three tournaments: Under-12, Under-13 and Under-14. After the preliminary round, the teams will be put into three groups (Gold, Silver and Bronze), in which the final placings will be allocated (the Gold final will establish the absolute winner, the Silver will allocate the 9th place, and so on). As usual, on Easter Monday, there is the grand finale in the Enerxenia Arena in Masnago, with the games for the Under-13 (at 9 a.m.) and Under-14 (at 10.45 a.m.) titles, with the final parade of all of the teams involved. The Under-12 final is in Gallarate (in the sports centre, in Via Sottocosta), on Sunday afternoon.

Five rounds, with twenty, under-16 teams: this is schedule for the “Young Legends” (which, in previous years, was called the “Memorial Rizzi” and “Memorial Barilà”), which is organised by the amateur sports association “6 Sport”, assisted by Basket Bugs Malnate, the company (represented by Fabio Giani) affiliated with the Federation, which provides technical support. There are six foreign teams, starting with the “usual” Team Ohio, who won the last four years (eight in total); then, the new team of Canadians in the Toronto Kings, two German teams (Urspring and Ludwigsburg), the Finns of HNMKY Helsinki, and Croats of Kvarner Rijeka/Fiume. The qualification games begin on Thursday evening and continue until the evening of Easter Sunday, when there are the semi-finals; the finals (four, no less) are all being packed into Monday 22nd, at the sports centre in Malnate (from 4.30 p.m. onwards, match for the title, at 9 p.m.).

“It’s still wonderful to see the synergy that’s created among the young people and their families, they are relationships that last, and we’re happy to cultivate them,” the Secretary of 6 Sport, Patrizio Di Fresco, explained.

THE “GARBOSI” IN A BOOK

At the end of the presentation, Gianni Chiapparo pulled a “rabbit out of a hat”, the book “Noi del Garbosi”, which he wrote, and which is published by Sunrise Media. “Inside, there are tales, stories and memories of some prominent people, who, in the past, played or coached in this tournament. We’re going to sell the book on the courts and at the “Triple” shop in Via Manin, and the proceeds will go to cover the expenses of the event.”

Chiapparo, who is very familiar with the two Easter youth tournaments, explained, “In the two events, there’s a great sense of friendship. Today, unfortunately, we have big problems in getting teams to come from abroad, and it’s difficult to find accommodation, because people are scared. Embassies have increasingly strict rules and this doesn’t help to bring in foreign teams. In my opinion, the two tournaments build bridges: young people are our future, but it’s up to us to educate them. Let’s not forget that.”

During the presentation, speeches were also given by the creator of the “Young Legends” (which, at the time, was the “Memorial Sergio Rizzi”), Giuseppe Livio, the long-standing referee, Viviano Molinari, the President of the Varese branch of the Italian Basketball Federation (FIP), Pietro Tallone, his predecessor, Giuseppe Rizzi (today, a member of FIP Lombardia) and the sports councillors of the three “main” towns in the tournaments: Dino De Simone (Varese), Irene Bellifemine (Malnate) and Emanuele Marin (Induno Olona).