The Colombian artist, who won the sixth GhigginiArte Youth Prize, is returning to the Ghiggini Gallery. 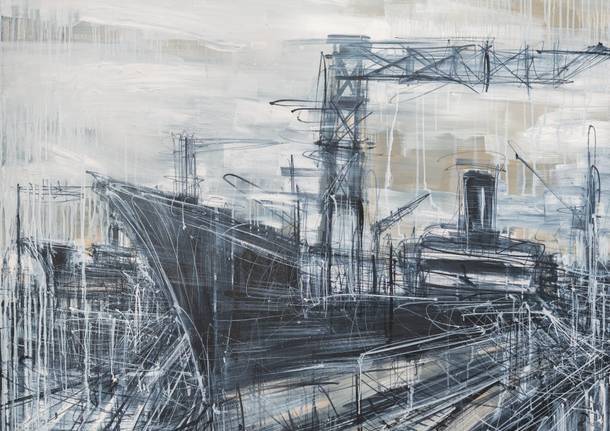 Federico Romero Bayter (Santa Fè De Bogotà, Colombia, 1981) is returning to Varese, to exhibit at the Ghiggini Gallery. The artist is exhibiting works that express his favourite themes: shipyards (with two different triptychs, on canvas and on paper), investigation of the urban landscape: Milan, St. Petersburg, Paris, Rome, Venice, the cities of Bayter are chaotic, intense and never ordinary.

Still life is another subject Bayter has recently begun to dedicate his time to, and he treats it with the same vigour and confidence as he does when depicting a ship in the harbour. Unapologetic gestures and a balanced study of intense colours are some of the qualities that can be found in Federico Romero Bayter’s approach to art; and we must acknowledge that he invites us to undertake a journey that is planned from the start, from which we dream never to return. The catalogue of the works on display will be available, in print, with an original drawing by the artist, and in digital format on the website www.ghiggini.it.

The relationship between the artist and the gallery is long-standing, and was established in 2007, when the young Federico, fresh from his studies at the Brera Academy of Fine Arts in Milan, won the sixth GhigginiArte Youth Prize. “Labirinti di solitudine” was his first exhibition at the Ghiggini, followed, in 2010, by “Estructura azul”, a personal exhibition, in which Federico showed how his style had matured. Large paintings were the protagonists of the exhibition “Penombra”, in the Church of San Rocco, in Carnago, a project organised in collaboration with the Ghiggini in 2012, and finally, the artist returned to Varese to take part in “Vicende & Vincitori”, a group exhibition organised in 2017, as a tribute to the gallery’s contribution to young art.

The exhibition will continue until 26 January 2019.