The new bridge on “sentiero 10” is ready: “It will be dedicated to fire-fighting volunteers”

The crossing, which was damaged by the fire last year, has been completed. And throughout the year, other works will be put in the pipeline 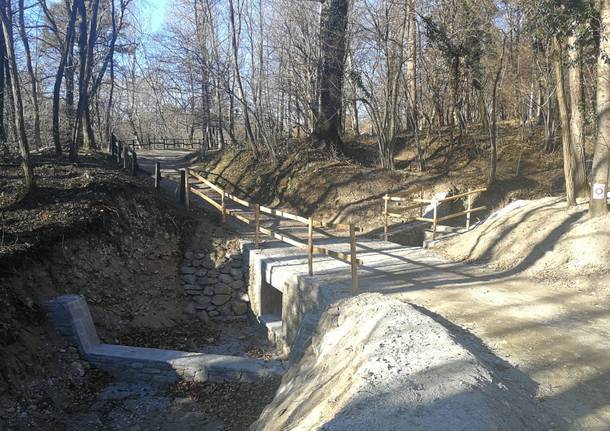 The new bridge, in the territory of Luvinate, located almost at the beginning of “sentiero 10” inside the Parco Naturale Regionale Campo dei Fiori, has been completed. This work was commissioned and financed by the Municipality following the violent floods that struck the territory between spring and summer, with hydrogeological instabilities, debris flows, mud, stones and burnt wood in the village and the isolation of three houses for a few days. All of this was caused by the fire of October 2017 in the Campo dei Fiori, which had affected Luvinate for about 200 hectares out of a total of almost 400.

“We are very satisfied with the work, that has been inserted in a pleasant way in the forest and especially suitable for ‘sentiero 10’ which is perhaps among the most popular and well known of the whole Campo dei Fiori,” emphasizes the Mayor, Alessandro Boriani. “As we all know, fire changes the hydrological seal of the mountain: where before, on the occasion of the rains, there were very modest and desultory flows, now there are violent, dangerous and sudden torrential phenomena that, in our case, have created deep lateral erosions and, locally, real chasms of 2/3 meters, that were quickly filled with earth to allow the passage of people. Now, with this work we hope to have put in place a structure that is capable of withstanding large amounts of water and therefore ensuring safety and security. As such, Luvinate is pleased to deliver not only to its residents, but to all users of the Park a really important and strategic work. The work, as a symbolic value of a bridge, will be dedicated to the women and men of the Civil Protection of the AIB (Antincendio Boschivo, i.e. Forest Fire-fighting). Let’s start from here with the new year for the many challenges of the post-fire Campo dei Fiori that still await us.

The floods of summer 2018 had also shown, in addition to the hydrogeological failure of various parts of the territory, the danger of burnt wood on the riverbeds, “with the creation of caps of water and debris, that are potentially dangerous in case of rain. For this reason,” underlines the Mayor, “in agreement with Institution Parco Naturale Regionale Campo dei Fiori, I signed an urgent order for the removal of part of the wood. The works, already started in recent weeks, are aimed at eliminating the most potentially fragile and risky situations for the safety”.

A project for the hydraulic regulation of the Tinella stream that crosses Luvinate (and which is, by conformation, the collector of all the water coming from the Campo dei Fiori) is currently being defined. “A small stream where the testimonies say that for decades water had never fallen and that now, even in the aftermath of the fire, in a few minutes of rain it turns into a river of mud and debris,” continues Boriani. “Unfortunately, we saw the consequences of the floods last summer and we fixed this with urgent works of cleaning and safety, although temporary, of over 100,000 €. Now, with this project, we intend to make the entire stretch that crosses Luvinate definitively safe, carrying out slope consolidation works, hydraulic regulation works, and extraordinary maintenance of existing works”. Being the main water network, the property is owned by Regione Lombardia. “For some time now, we have been talking in a very fruitful way with the competent offices of the “Direzione Generale Territorio e Protezione Civile” of the Lombardy Government and for this reason we are confident of the support and economic participation of Regione Lombardia.”

In 2019, we will proceed with the most general works, which have already been funded by Regione Lombardia with 600,000 € for the territory of Luvinate, but inside the woods. The project, by Alessandro Nicoloso, will focus on the sections of the pole, downstream of “sentiero 10” where the river flows on particularly fragile and erodible geolithological substrates, and will provide for works of regulation that, while on the one hand aim to decrease the erosive capacity of the river when it floods, on the other hand, as a natural consequence, will drastically reduce the debris input at the entry into the town avoiding the possibility that, as has happened in the past, deposits build up near the bridge, leading to sensitive and dangerous reductions in the flow section and the associated risks of flooding. Upstream of “sentiero 10”, in correspondence with some emergency works, there are plans to build a detritus deposit point that copiously descends from the Barassina valley, whose descent, certainly favoured by the passage of the fire, is still structurally connected to the geo-lito-morphological features of the upper part of the supply basin.

In November 2018, thanks to the intervention of the President of the Commissione – Territorio e Infrastrutture (Territorial Commission) of the Regional Council, Angelo Palumbo and with the interest of all the regional councillors elected in the province of Varese, the point was made on the interventions and priorities of the Park one year after the fire. Hence the agenda that was unanimously approved in December 2018, which commits the Council to finding the necessary resources to intervene, upstream of the villages, on the almost 400 hectares of mountains between Comerio, Barasso, Luvinate, Varese and Brinzio crossed by fire. “We’re talking about approximately 2,000,000 euros already identified in the budget thanks to the interest of the Councillor Rolfi and his Department. Now the dramatic chronicle of these days, with the fires in the Valganna area, confirms the priority of the institutions to intervene to protect and safeguard our forests. Better to prevent and make safe, than to have to run once again to the shelters. We are sure of the interest and support of President Fontana and the Regione Lombardia”.